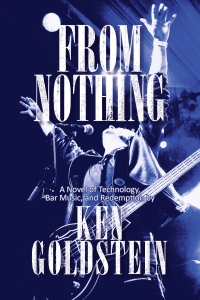 A Novel of Technology, Bar Music, and Redemption

by The Story Plant

Victor Selo had blown up his life. A wannabe rock star turned tech savant, he’d wagered his Silicon Valley executive position on a corporate inside straight and lost. Having security escort him out of the building was the best thing that happened to him that day. The rest left him in the hospital, broken, broke and with no prospects. 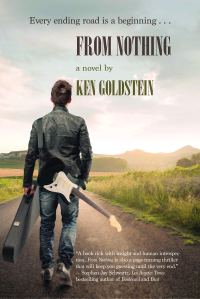 That’s when a shadowy stranger with questionable motives came with an offer: a chance to get his life back – and better – if he simply cooperates. It would require becoming invisible for a while, but he would be hiding in the spotlight, playing guitar in a Vegas cover band. Reluctantly, Victor accepts and begins an odyssey he never could have imagined. One that involves a charismatic lead singer who owns the stage but aspires to own an Elvis wedding chapel, a mesmerizing woman who can play anything on her keyboards and can really play with Victor’s head, and two specters from his old life offering competing devil’s bargains. Suddenly, multiple futures are opening up in front of Victor. All of them offer opportunity – and each comes with potentially catastrophic risk.

Populated with a wide array of colorful characters, brimming with reflections on everything from love to God to the price of commitment, and backed by a great soundtrack, From Nothing is an endlessly engaging work of fiction that will resonate like your favorite song.

Praise for From Nothing

“From Nothing by Ken Goldstein is unlike any novel I have read. It carries so much punch and intrigue that I could not put it down.”

“From Nothing will remain in your mind long after you’re done reading. It’s got great ideas, mind-blowing tension, and adventure in every scene. It also contains music lyrics from an amazing playlist almost everyone up to the 21st Century can appreciate and rock along with.”

“This is a 300-page thrill ride that takes readers behind boardroom doors and into the back alleys and underhanded tactics of a fictional, but completely authentic, Silicon Valley acquisition. The author, Ken Goldstein, seamlessly blends backroom private equity deals, coders bent on revenge and classic rock legends into a compelling novel that crosses between cyber thriller, a financial thriller, and rock-and-roll nostalgia. I absolutely loved this book.”

“From Nothing is a taut thriller with plenty of soul, action, and percolating dialogue. Each plot twist keeps the reader rooting for the rather dour anti-hero who, like the rest of us, just wants love. And you know they wrote a song or two about that. Along the way, we get tantalizing glimpses of Silicon Valley corruption conducted by management hell-bent on crushing the worker bees.”

“Enter the world of Ken Goldstein and From Nothing and feel the cutthroat atmosphere of big business and high tech and the sizzling excitement of the backstage world of music. Realistic dialogue, well-developed characters with personality, agendas and dreams will blur together as one man falls into the chance to live his dreams, but not in the way he imagined.”

The day Victor arrived and saw the disarray, as well as the crippled balance sheet, he called Claire and told her he had made a terrible mistake. There was no company here, no foundation, just a concept and a fast evaporating bank account. They were practically starting from scratch, one degree above zero, not even. It wasn’t a makeover. It was a do-ever. The chances of getting from zero to one were formidable beyond belief. They would run out of time. They would run out of money. Morale would implode. They would never get a solid product out the door. Claire told him on phone call after phone call he hadn’t given it enough time, that he needed to tough it out for at least a year before he threw in the towel. If it was a good idea, then make it a good product. Zero to one was the precise formula for winning and she knew he could do it. Truthfully she probably didn’t, but she knew Victor would always regret it if he didn’t try, if he didn’t give it his all before calling it quits. She knew that was who he was. Failing was okay, but not trying was pathetic. Running away would be a container for regret, nothing else. There was inspiration in commitment if he looked for it in the people around him, the people who were counting on him. He had to find the voice, the path. He had to try.

In the back seat of the small Ford whatever it was, finding air where so little was available, Victor wondered back to how he had arrived, how that same illusiveness had worked for him rather than against him. He had never been sure why he had been so successful at Global Harmonics, why a music guy could make it as a software guy, but one thread in his career had been consistent. Early on Victor had figured out that software engineers—coders, programmers, whatever you wanted to call them—were more like musicians than they were like technicians.

There was something about software people that allowed an easy connection for Victor. When they weren’t defensive, they were sensitive. They were quiet. They were thoughtful. They fashioned themselves as creatives. They were too often passive aggressive. They liked feedback but hated criticism. They liked collaborating intensely but abhorred petty conflict. They liked to party when they weren’t working. They had subtle, wry senses of humor. They could tune out background noise, ignore distractions, focus. They wanted to find the next big thing. They grew restless with sameness. They could be very mean spirited when under attack. Schadenfreude was universal but a despised contest of wills, a sabre fight fought for position but never a trophy awarded. They needed a safe place to test out their theories and fail without finality, a playground more than a fight arena, a referee who explained the rules and loved the game.