As I have been out discussing my debut novel, This is Rage, over the past few months in bookstore readings and radio interviews, the question often comes up as to whether it is similar to the latest high-profile motion picture from Martin Scorsese, The Wolf of Wall Street. My answer is no for three reasons. First, my story is purely fiction, and Wolf is based on a memoir. Second, my story is exaggerated for the literary purpose of satire, and Wolf appears to be exaggerated (or not) for spectacle. Third, my story depicts a cast of amoral characters on a collision course with poetic justice and renders a series of life lessons and impacts offered for discussion, while Wolf has no moral center and crudely celebrates the life of a scumbag. Fair warning, more eye-opening spoilers ahead. 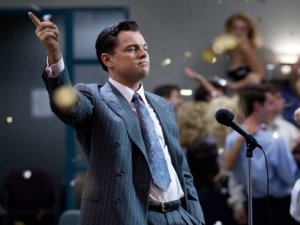 I usually quite like Martin Scorsese pictures, but I really despise this one. I don’t think he set out to make a movie that glorified the inexcusable crimes of Jordan Belfort, but that’s what’s on the screen, and now that people are crying out against the film, Scorsese and his cast are left with few options but to defend their work as creative expression. I don’t dispute their right to produce the film or make money from the enterprise, I simply wonder why it was necessary, especially for such an accomplished company of actors led by no less than Leonardo DiCaprio. You see, while some of us see through the veneer of statements proclaiming the indictment of Belfort as a cautionary tale, the literature simply isn’t there to support the defense. An extremely simple fix would have gone a long way to offset the damage caused by this movie in showing the devastation caused to the victims of the penny scam swindling. We never, ever see anyone get hurt by the incessant wave of fraud that takes money from the pockets of innocents and hands it for abuse to criminals. Not once, anywhere in the film, do we see the pain created when a garbage stock is sold to an ignorant or unsuspecting victim at 50% markup. Would it have been that hard to show that white-collar crime is not victimless? Do people still not understand that when sycophants like Belfort (and Bernie Madoff) lie to clients and empty their pockets, entire livelihoods–and futures–are wiped out?

It’s not funny. It’s not the stuff of sardonic humor. It’s too real. Horrific acts need to be condemned without ambiguity, or at the very least illustrated through juxtaposition to depict thought-provoking irony. The justice system failed to cause Belfort to endure fair punishment; he did 22 months soft time and now he is a celebrity. How about that, a bona-fide celebrity for publicly exposing that he lived a putrid life and is now selling his salesmanship skills as legitimate in pay-to-attend seminars, further brought to visibility by a Hollywood movie deemed worthy of frothy awards. The movie shows everything that goes against the grain of humility and equality, but let’s send up flares and say it’s a tour de force.

You know what else isn’t funny?

Sniffing cocaine off the rear end of a hooker, all paid for with piles of your stolen cash. Nyuck nyuck.

Driving a Lamborghini on public streets under the severe influence of quaaludes and endangering the lives of people around you. Nyuck nyuck.

Getting oral sex in a glass elevator from a co-worker while the rest of your company watches from the trading floor. Nyuck nyuck.

Laughing yet? No, apology not accepted. How about when a crowd of Wall Street insiders gathered for a screening of the film in Battery Park and cheered at its most lascivious moments, essentially endorsing the behavior of Belfort and his punk posse, making it clear that generating big money was laudable, and spending it lavishly even more laudable. Yeah, it happened. You remember these guys, they were the ones our federal government bailed out when the great recession was at its worst. Now they are the same guys who think it is time for Washington to back off on regulation, since everything is “back to normal.” Yep, welcome to the new normal.

No, I’m not indicting all of Wall Street; quite the contrary. I believe in the fundamental strength of our economy, and that trust in investment is the backbone of financial advancement. We put our money into stocks and bonds long-term to see our free market assets grow collectively over time–capitalism for the long haul, compounding legitimately for the greater good. It’s not meant to be a con man’s game. It’s not meant to be a fixed casino. So why portray it that way, and why would anyone who makes his or her living off the public trust applaud such despicable behavior? Starting to wonder if the 1% and the 99% are separated by more than just wealth?

Here’s something else that’s not funny, and the core of what caused my emotional reaction to this vile portrayal of a pathetic American life: It’s an open letter from Christina McDowell published in the LA Weekly. Ms. McDowell’s father was one of the pukes that Belfort threw under the bus to arrange for his reduced sentence, and her life in the ashes that followed was emblematic of the very discord that Belfort created. Because her father was also a criminal, she does not make excuses for the suffering brought on her by the loss of her family’s affluence, after which she sank into poverty as a result of her father’s lying and conniving. Instead she writes with immense empathy for the victims of both her father and Belfort, wondering as I do why these victims show up nowhere in the film, instead remaining faceless and invisible, as if nothing tangible was really taken and incinerated. This passage the day after Christmas left me especially disturbed:

So here’s the deal. You people are dangerous. Your film is a reckless attempt at continuing to pretend that these sorts of schemes are entertaining, even as the country is reeling from yet another round of Wall Street scandals. We want to get lost in what? These phony financiers’ fun sexcapades and coke binges? Come on, we know the truth. This kind of behavior brought America to its knees.

Nope, not funny. Not entertaining. No moral center. No poetic justice. So as the actors and technicians and storytellers and creative journeyman who crafted this epic adaptation make their way to the stage to accept their trophies this season and deliver all sorts of silly speeches about the role of art in society, think about what they did and what they could have done. Art and entertainment can be a stylized mirror, or a refracting lens, or a pastiche of temporal mores, or a slice life that causes us to interpret the actions of characters and ideas of creators. Or it can just sit there like a lump and take our money for nothing, no different from the scoundrels depicted. Two stacked wrongs don’t make this right. Don’t get fooled again. Hold the Oscars, hose this one down with a power-steam cleaning and let it dribble down the gutter where it best can dissolve from future memory.