How about The Beatles on Norwegian Cruise Line making our away around the calm summer waters of the Hawaiian Islands?  That’s about as magical a place for The Beatles as I can imagine, beyond the Sea of Holes and across the Sea of Time.  Toss in a set list that spans the entirety of Beatlemania performed by one of the most gracious husband and wife musician couples I have ever met — now you’re talking magic, an experience so utterly perfect it’s hard to believe it’s even real. 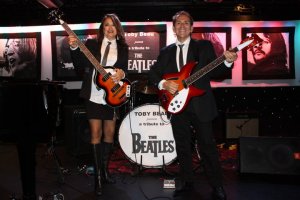 Toby Beau is the joyous source of this sound celebration, a rock band with Texas roots dating back three decades, now performing on the main stage and in cabaret surroundings of the Pride of America.  It’s not the usual kind of place you would find me, nor where you might expect to be sharing in the sing along chorus of Hey Jude.  I think that was a big part of what made it all so wonderful, it wasn’t the expected in any sense of manner or place, and yet it all just clicked the way brilliant music and expert performance always succeed — pleasing the mind, pleasing the senses, creating realtime context that is both Yesterday and Today.

Last week my wife and I spent a week island hopping in my home state of Hawaii with about 2000 fellow NCL passengers.  No, it was not a normal thing for us to do, but playing tourist can be fun if you do it right with plenty of time for snorkeling, hiking, biking, and kayaking.  We didn’t spend much time at the buffet, but we did catch all of the live music.  Vacations can be an amazing time of discovery, where you can relax and float downstream, and whenever we hear there are Beatles tunes in the house, well, we just go check it out.  About midway through our week we ventured to the main showroom and met ax man vocalist Balde Silva, who performs every single week of the year beside his sometimes lead, sometimes harmonizing wife Rennetta Dennett Silva, the two of them still the core of Toby Beau.  Their biggest hit, My Angel Baby, came in 1978, around the time they were touring with such high power acts as the Doobie Brothers, Bob Seger, and Steve Miller.  Balde and Rennetta are music industry survivors who have reinvented themselves any number of times over the years, not only proudly still playing live music, but playing it together, having a blast, and obviously forever in love.

That brings us full circle, back to The Beatles, at sea, and the kind of love that lives forever in a set of songs that work no matter where they are played, that prove themselves over and over again precisely because they take on new meaning when bounced off new walls.  Music veterans like Toby Beau evidence what it means to play flawlessly, inserting subtleties that are different each night, reflective of the experience that unexpected places can offer, reverberating off audience participation, taking in the physical moment and replacing it with a memory.  It takes a truly inventive catalogue to pull that off endlessly without becoming rote.  Musical excellence is one part material, one part craft, one part passion, and one part ethereal.  A cruise ship is just a venue, a stage is just a platform, but layer in the mystical concoction of the lads from Liverpool with a pair of performers determined to inject love into the tunes, and the formula becomes fully extemporaneous in the emotions that swell.

Balde and Rennetta take it a step further, offering the story of The Beatles through bits of spoken history, stitching together the songs as a real life fairy tale.  This is not impersonation but tribute, commencing with the earliest days of I Want To Hold Your Hand and A Hard Day’s Night, winding the road to Yesterday and Nowhere Man, then reaching with bravado to We Can Work It Out and Back in the USSR.  We get Something by George, then we Get Back, then we Let It Be.  Hands wave in the air for Hey Jude, and then the band covers a Beatles cover with the dance floor encore, Twist and Shout.  It all takes less than an hour, less than a dozen cuts, but once again we have taken the journey anew, heard it differently, felt it reimagined, shared it somewhere we probably won’t return but can carry with us forever as its own idea — an interpretation shaped by its circumstance, constant in its creative rejuvenation.

The Beatles stayed together less than a decade, an incomprehensibly brief interlude that resulted in a body of work that remains inexhaustible in inspiration.  Balde and Rennetta have stayed in the game as long as they have because of their love of the music, their love of the art form, and their love of each other.  The combination of all that love and craft and chemistry just got added to my canon of musicality, new energy flowing through time-tested lyrics, new theater emerging from a bit of the acoustic and a mastery of the electric.  We didn’t go to sea to find it, we found it by chance, spontaneous discovery — and because we shared it, once again it is ours.

Let the music wander where it will, infuse it valiantly with love, the world is at your command.  What we discover in the familiar is the awakening of the imaginative, the surprise of the open-ended revitalized by care and intension.  You can hear it differently if you allow the phrasing to bend here, there, and everywhere — the artists’ touch a composite of admiration and trust.  Thank you again, Balde and Rennetta.  Thank you again John, Paul, George and Ringo.  The music is perfect.  The music is forever.  The music is a gift to be celebrated and loved.

8 thoughts on “The Beatles at Sea”