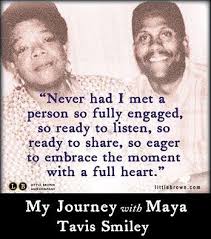 Every year the Los Angeles Times Festival of Books continues to cement itself in my psyche as a major go-to event. Now the largest book fair in the United States, its bustling aisles fill the USC campus for two days with eager authors and insatiable readers. Each year I joyously look forward to attending, not just for the schedule of talks I plan to experience, but for the inevitable surprises I discover. This year’s surprise was an exceptionally powerful book talk on an open-air stage by Tavis Smiley about his lifetime of interaction with Maya Angelou.

Although I have not yet read Smiley’s new book, My Journey with Maya, my takeaway from the forty-five minutes my wife and I listened to him speak was profound enough to report here as a stand-alone inspiration. Smiley talked openly and honestly about how he personally crashed and burned after a failed election campaign for Los Angeles City Council following a gig on the staff of Mayor Tom Bradley. With a mountain of campaign debt crushing him, he was to be evicted from his apartment with no prospect of employment. A friend arranged a happenstance job for him to travel with Angelou on a brief trip to Africa as an assistant, mostly to carry luggage. That kicked off a lifelong friendship and dialogue between them where they didn’t always agree, but Smiley always found a way to learn.

I’m going to read the book and I hope you will as well, so I won’t go into a lot of detail here on all he said. What I want to share are the two most striking learnings from Angelou that Smiley encoded, largely because they have been stuck in my head and churning ever since we stood there in the sunshine listening to him. I have only seen Smiley a few times on television over the years, but standing in front of him, hearing his passion, listening to the heartfelt words that flowed from his inner being completely coherently without any notes or podium, I was moved completely by the sweat and memory that poured from his soul. The two ideas that Angelou planted for growth in his brain couldn’t have been more relevant to me than if I’d heard her say them to me herself. As far as I am concerned, I think I did hear her speak on both counts, channeled in full energy by his voice calling on hers:

“Baby, we find our path by walking it.”

If you think those are just broad, sweeping, generic statements of advice from the elevated dais, stop here and go read someone else’s reflection, or perhaps today’s stock market results. On the other hand, if you’re like me, copy those words onto a Post-it and put them in plain sight for the next decade or so. When Maya speaks, it’s a good idea to listen. Tavis did, and his life was reinvented.

I write a lot on this blog and in my books about resilience and reinvention, the lifeblood of innovation. When I heard Smiley put the notion of self-motivation in so few words from Angelou, I was heartened, invigorated, and inspired. She got it. He got it. I wish everyone could get it. And still, transferring the words of others into action is immensely difficult, filled with pain, buried in setbacks, and only on the most wondrous of occasions celebrated in brief victories.

Smiley was adrift after losing his election and identity in public service. He sat stunned and stared at the failed image of himself. He wanted desperately to reinvent, but had no idea how. He was frozen. Angelou saw through him to his core. “Baby, we find our path by walking it.” If it had been a Nike commercial saying “Just do it,” it couldn’t have been clearer advice: Just do something. Do anything that matters to you. Find thought in action, not in dire contemplation. Whatever you do is better than nothing, and it will inevitably lead somewhere. Sometimes I tell people to form a plan—a conceptual roadmap of any kind—not because you will follow the path from here to there, but because if you start with a map, you will go somewhere, and that has to be better than nowhere. You won’t connect the dots—the dots will connect themselves in ways you never could have imagined. Yes, you find your path by walking it. Get busy. The rest will be discovered when you least expect it.

Smiley was crushed because the electorate said no to him. He wanted to serve, but the voters said “no thanks.” Again Angelou saw motivation in the otherwise unfortunate result. “Sometimes rejection is redirection.” If the voting public did not wish to recognize Smiley as an elected official, was that the only way he could realize his dreams? Obviously not, because a few years later Angelou appeared as a guest on Smiley’s national PBS talk show. How about that? From apartment eviction to the interviewer’s chair in so little time you almost think he made the whole thing up. He didn’t. He listened. He accepted “no” as meaning “not now, not here.” Then he went another way, and his dreams were realized beyond all imagination. Can it happen to you? Yes, if you see the negative before you as motivation to go another way. That new way might be a million times more fulfilling than what you thought was your only way. We have no only way, just opportunity to be who we need to be in an as-yet undiscovered path.

Both of these precepts have been guiding lights in my own life, yet until I heard Tavis channel Maya in an unplanned walk by the stage where he happened to be speaking when I was on my way to another place, I wasn’t aware how much I shared with so many others there on the grass listening intently to every word. Maybe we are more similar than different. Maybe we all do share the same dreams of enrichment and fulfillment. Maybe if we all listen to each other a little more closely, we can help each other get from the stagnant to the unstoppable. To quote another dreamer, “Imagine.”

I sure do love the Los Angeles Times Festival of Books. I can’t wait until my walking path takes me back there next year for another dose of redirection. See you under the tents. I’ll be the guy taking copious notes, or maybe talking ideas if you start the conversation.