Following up my last post on the scarcity of successful internet brand turnarounds, I had a number of interesting discussions with colleagues in search of the answer why. While it would be impossible for me to boil that down to a single concept in a single blog post, the common theme seemed to be the extraordinary difficulty in reinventing the key products or services under a once a powerful but now fading brand, such that the new offerings were up to the standards of the original breakthrough experiences.

Digging deeper into this theme of why a brand that was created of innovation could have such a hard time finding reinvention in subsequent cycles of innovation, the culprit fueling failure often found the compass needle pointing at process. Where some form of good process once allowed staggering creativity to flourish, failure to reinvigorate good process most often led to uninspired product development, lackluster offerings to customers, and ultimately a continuation of the downward spiral where a turnaround was the hope. Called out for especially pernicious result:

1) Tepid Innovation—believing that a little idea was a big idea almost in desperation for lack of identifying a big idea. Copycat products that responded to market leaders to segment small bits of their commanding market share consumed energy where market leading ideas remained in small supply.

2) Lack of shared vision—weak leadership failed to articulate a big idea around which teams could rally, so buy-in became compelled rather than organic. Empowering strong leaders to lead is not often enough a company’s core competency, because truly creative rebels don’t want to be managed, they want to be sponsored, so that they can make change happen in cultures that prefer conformity, and conformity is not how you win market share. When the right leaders are chosen and empowered, they can build a shared vision by leading, not managing.

3) Corporate intervention—a young company acquired for its Think Different mentality and bold new ideas becomes indoctrinated in the prevailing corporate culture of the parent, and begins to see the world through the lens of the acquirer rather than for the reasons it was acquired.

4) Lack of listening—there is no longer a measurable correlation between time on the job and quality of concept. The youngest arrival in a company may just have the best ideas, but if there is no forum for real listening and discussion, the most creative voice can be too easily silenced.

5) Marketing/Engineering Wars—rather than partner, the two necessary sides of the winning formula argue for the sake of winning the argument. They forget what it means to win—that their competition works at another company. 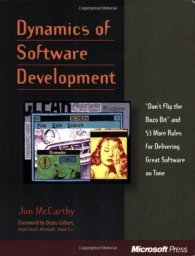 Many of these themes are explored in the brilliant and surprisingly nontechnical book Dynamics of Software Development by Jim McCarthy, which I have encouraged every senior executive I have met to read as well as every staff leader I have mentored. In my experience the core issue comes down to learning how to build a consensus, understanding that consensus building is not polling or voting or majority rules. Product development is an expertise, like any other profession. Many individuals can learn to do it adequately, but few can do it extraordinarily.

Look at some of the new wave of great companies and you see the top-tier of product development pros at the helms: Mark Zuckerberg, Reed Hastings, Elon Musk, Reid Hoffman. Of course those are all CEOs of substantial, important, disruptive companies and they are not available for brand turnarounds at internet companies on the rebound, but the question remains, are the people being put in charge of turnarounds somehow similar in nature and characteristics to the great leaders of product development? Are they able to articulate a vision around which people can rally willingly and with trust? Do they listen to a multitude of opinions and then make decisions that incorporate feedback because it is critical, not because it represents a political agenda? Do they have good taste, and can they see beyond the state of today to leapfrog a competitor with perhaps something that didn’t do well in a focus test? Have they built a process in their environment where good work can shine and fast iteration can overcome mediocrity in rapid succession?

Consensus is an astonishingly complex concept; it is not at all compromise. It begins with vision, It is evangelized through leadership, It becomes stronger through group participation and feedback, but it is guided to completion by the same vision and leadership from which it emanated. Consensus goes off track when a leader feels for whatever reason that bits of all contributions most be included to create the consensus, the proverbial camel with two humps. That is wrong, because all comments and critiques will not be right if breakthrough products are your goal. Group participation is a must to achieve organic buy-in, listening is a must for a leader to bypass being feared as a despot, but for great product development to triumph, a vision must remain strong, pure, unique, original. That can never be taken for granted, and everyone on a team will not always be happy at every twist and turn. Yet if you have ever had the privilege of working on a world-class, game changing product, you know that most sins are forgiven when it all comes together through good process, and it does not look anything like the system of checks and balances we see in representative government.

Product development is driven by a different motive set, of creative destruction and inspired disruption, a high stakes arena where often winner takes all, second prize means you go home. Democracy does not work there, and democratic compromise is not workplace consensus. Show me a great product, and I know you will find iteration, but I bet you won’t find haggling.

Vision is what launches a brand. Vision will always be key to reinventing a brand. Process is the key to translating ideal vision into working reality. Consensus is the element of process that gets everyone on a team to remain part of the team, because success is owned by the team, not by its individual components. Get most of that right and product development has a fighting chance, and so might reinvention.

7 thoughts on “Product Development is Not Democratic”