Some people focus on dreaming. Some focus on doing. The ones who find a way to bridge the gap make change happen. Every once in a while, as Steve Jobs would say, they put a dent in the universe.

Many people elicit feedback. A few of them take something away from that feedback and apply it to what they are dreaming and doing. Yet too many solicit the feedback and then bat it away, a check mark on their roadmap to convince themselves they are not building in isolation. They have no interest in taking their vision to another level if it means wandering a bit from a too rigidly determined path.

The combination of dreaming and doing creates the flint and steel of innovation. Without both the status quo rules.

The combination of listening and interpreting is what hones an idea and an action plan, shaping and molding it into a viable product. 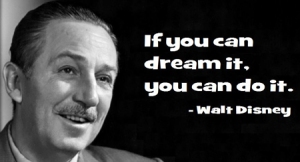 Walt Disney said, “If you can dream it, you can do it.” For decades I’ve been trying to decipher what he really meant by this. What I do know is that this calling is aspirational. It is incredibly difficult to meet this challenge. Walt defines a promise, then delivers the promise. This has taught me that when I make a promise to customers, I must be fully committed to delivering on that promise. If I allow a gap to remain between dreaming and doing, the dream becomes cynical. Failure is okay if it’s part of the path of learning, but a cynical promise is never okay. That’s when words become hollow, and customers abandon a brand.

Recently on a cross-country flight I saw the movie Jobs.  I don’t know if it’s a great movie, but it did remind me clearly of Steve’s near maniacal obsession with perfection, with making excellence a reality, with getting everything right. That’s a standard that will surely break the mediocre and inspire those who want to be inspired. He was a dreamer, he was a doer. In his own weird way, he was also a listener. You had to listen closely to hear where he was hearing, but Steve was always listening.

Over the past few years I have worked with several emerging companies, to help them craft and realize their articulated strategies. I have seen magnificent dreams get stuck either because they were too unformed to realize or because the dialogue around the table became stunted by poor interchange. When you travel a great deal and interact with a wide range of customers, you begin to see the difference between actual listening and pretending to listen. You also see the results—who is gaining ground and who is stuck at the table. In my observation, the people stuck at the table might still be dreaming instead of doing because they are not listening.

As a team grows, the voices on that team expand, none more important than the voice of the customer. Does that mean a powerful vision should be diluted into compromise so everyone’s voice is incorporated? Of course not! I have written about that many times before, secure in my belief that product development is not democratic. A big idea is almost always pure, and consensus is not the same as compromise. Yet I have also sat in the room when the small spark needed for bringing dreaming into doing was snuffed out time and again. No matter how many times it was said, it was not heard. Thick heads prevailed. The status quo ruled. An ordinary idea was dressed up as something extraordinary only to be exposed as counterfeit when stared down by paying customers.

Big dreams are rallying cries; small dreams are not. Incremental dreams do not put a dent in the universe. Dreams that overcome entrenched hierarchies fire up those around you and fire up your customers. The fire starts with a spark. The spark? Listening.

Business is pragmatic. Say what you are going to do and then do it, otherwise your brand promise will be empty and your customers will abandon you.

Dream big, but understand that once you share a dream, you must be committed to bringing it to life.  That is a dream worth dreaming, worth fighting for, worth sacrificing for, worth celebrating.  Hold people accountable for their role in the dream and cause them to own a share in its success.  That is a much more worthy endeavor than just doing a job.

The end of each year is a great time for personal reflection. What can you do next year that you weren’t able to do this year? Are you dreaming it or doing it? And as you embark on doing it, make a point of listening to those you need to hear. Then make the hard calls, just like Steve Jobs, just like Walt Disney.

7 thoughts on “Dreaming and Doing”