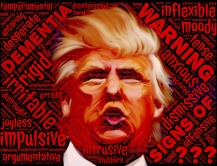 I haven’t written about Donald Trump for quite some time. No, I’m not unwell, not more than anyone else. I brought out my third novel earlier this year and wanted to try to focus on storytelling without being overly divisive, although I will say at some of my book talks the social sparks found a way to fly. Guess I can bring that out in an audience even when I don’t try too hard.

I also became creatively exhausted on the topic of politics as it pertains to my blog and let Facebook do a lot of the heavy lifting for my rolling commentary. Apologies if you have been overwhelmed by that. Well, no apology really. It’s stuff I needed to say, just not here.

Sadly the Kavanaugh confirmation hearings have roped me back in for the moment. It’s not just Kavanaugh, with whom I sadly share a branded diploma. It’s the voice of Trump that set me off. It always is.

The pervasive nature of Trump’s dysfunctional behavior for the almost two years he has been in office oozes without containment far beyond the Capital Beltway. The question of Kavanaugh’s judicial temperament was brought to bear during his highly combustible vetting. Even if he were deemed to fail this test, his shortcomings are but a pittance compared to Trump’s demonstrated abomination in presidential temperament.

Trump is not satisfied laying waste to government conventions and respectable demeanor. He has declared a culture war on civil discourse as we know it. His public comportment does not end at being reprehensible. He strives to be offensive in order to fully make the point that he has the bully pulpit, he is in charge, and he is entitled to any style of verbal combat he alone condones.

Unfortunately, his influence does not end when the video clips cease to loop. He has changed our neighborhood rules of engagement. His warring rage on opponents is bad behavior made OK.

Perhaps The Beatles said it better:

If he can be an aggressive jackass without any filters of polite society, then it’s an easy step to thinking so can I. So can you. So can we all.

So many of us are now emulating his frightening postures, we are transforming our interactions into Trump World. This seems to be what he wants. It divides us. It keeps his platform solidified while we crumble into anarchy.

What makes me so sure? It’s hard to argue with the psychological tyranny of the workplace.

If you’ve worked in an office—or pretty much anywhere with a hierarchy—you know that people begin to take on behavioral traits of the boss. It’s a real phenomenon that begins subtly enough with quirks and builds over time with implicit permissions.

Allow me to illustrate the case, and then you can fill in your own anecdotal corollary.

I once had a prominent boss who sat at the head of the table during meetings with a disposable plastic water bottle. When he finished drinking the water, he would put his hands on either side of the bottle and crush it accordion style. Within two weeks of his arrival most everyone around the table was doing the same thing. With the echoing thunder of crushed plastic, our meetings began to sound like the Fourth of July.

I often use a borrowed expression in work situations: “Luckier than Steve Guttenberg.” At this point in pop history, few remember where it came from, let alone the target of its sarcasm. When the movie Three Men and a Baby was released in 1987, it starred the very famous Ted Danson, Tom Selleck, and… Steve Guttenberg? In its time it was a quirky joke. It still comes out of my mouth when we get unexpectedly lucky in business. Within a week of saying it in any environment, I will hear it repeated back multiple times. I’ve asked the younger people who parrot it what it means. They have no idea, but they keep saying it. Often they laugh at the joke, not even googling the punchline.

Let’s call those relatively innocuous examples of boss behavior becoming everyone’s behavior. It gets much worse.

I had another boss with a penchant for taking credit for other people’s creative work. I should have known something was up when he regularly used brilliant media samples created by companies unaffiliated with ours to pitch the potential of our company to clients and investors. He never actually said we created those samples, he just used them to illustrate possibility, so I bit my tongue and let it go. I noticed others around me were also squirming, and the level of trust with this boss became built on silence rather than candor. Later he decided a high-profile project I had designed from concept to prototype hadn’t really been created by me but by him. He took over development of it from me and asked me to focus again on blue-sky initiatives. At that point I fully understood the downward norms of his success. I quit and restarted my career in a much better place.

Think of your own office emulation. Got a nasty example you can’t shrug off?

Now imagine the biggest Boss-in-Chief. Imagine how his daily abhorrent conduct is eating away at our nation’s cultural norms. Think about what you are seeing, hearing, and reading in routine circumstances that two years ago would have been considered appalling.

He mocks a victim of sexual assault. He mocks a physically disabled journalist. He belittles the military service and wartime imprisonment of a senator. He insults the supreme sacrifice of a Gold Star family. He touts his wealth as permission to have his way with women at his whim. He proclaims that his ability to avoid taxes makes him smart. He denies climate change in direct opposition to the vast majority of the global science community. He cries out “America First” in a nation that already consumes the most natural resources per capita and maintains the planet’s unequalled reserve of nuclear weapons.

What impact might that egoism be having on the rest of us? I’m not suggesting most of us long to lead rallies with chants of locking up an opponent, but think about what you are doing that you wouldn’t have done publicly in the prior time frame. Might you be acting ever so slightly differently? Are you feeling OK about it? I’m not.

Trump’s impact on our lives rises beyond the content of his thin theories and thinner policies. His stab to our innards is more than the overt lies he tells without remorse. The deterioration he is causing is systemic. Were we to be transformed in his image, his chaos would become our chaos.

Modern leadership is a privilege built upon empathy and humility. To rise above cynicism, we must embrace the notion of leadership by example. When we are entrusted with authority, what we do is what we allow others to do.

Ridding ourselves of this malady will be no small trick. If it’s crept into your world view, start to root it out. If it’s infected your workplace, blow it up with a bomb. No, no bombs. Just eliminate it without drama. Insist collectively that the dreadful antics go away!

When enough of us allow Trump’s norms to become our own, the detriment to our well-being will last well beyond his term, likely beyond the life service of a Supreme Court justice. That vile tone will remain his legacy long after we think we are done with him.

When we rot, we decay until we dissolve. It’s not OK to let ourselves rot. Not now. Not ever.

7 thoughts on “Bad Behavior Made OK”